My regular opponent, John, and I played out a fairly brutal Fistful of TOWs scenario last night.

I recently assembled and painted some city buildings purchased from Gamecraft Miniatures a while back, when they first released their new 1:600 terrain line. These are very nice laser-cut card-stock buildings, which look great, but more on these another time!

Needless to say, I  wanted to set up a table to try out a city-fight of some sort. The battlefield was as shown below:
﻿﻿
I've also recently finished painting up the majority of my Australians for my campaign setting, so of course those had to be used too. The result? I randomly rolled for a scenario to play over the battlefield, to involve Aussies against the REDs.

This time, the scenario was to be a "deliberate attack", with the Aussies (BLUE) defending against the RED attackers. The REDs would have 10,000 points and the option to take pre-planned artillery and airstrikes, whilst BLUE would have 5,000 points with the option to buy prepared defences.

In line with the scenario description in the FFT3 rulebook, the scenario objective was a suitable feature within the defender's deployment zone. I had one of the Gamecraft buildings that fitted the bill - a very large bombed-out factory, which I decided was a key munitions factory to be captured by RED. 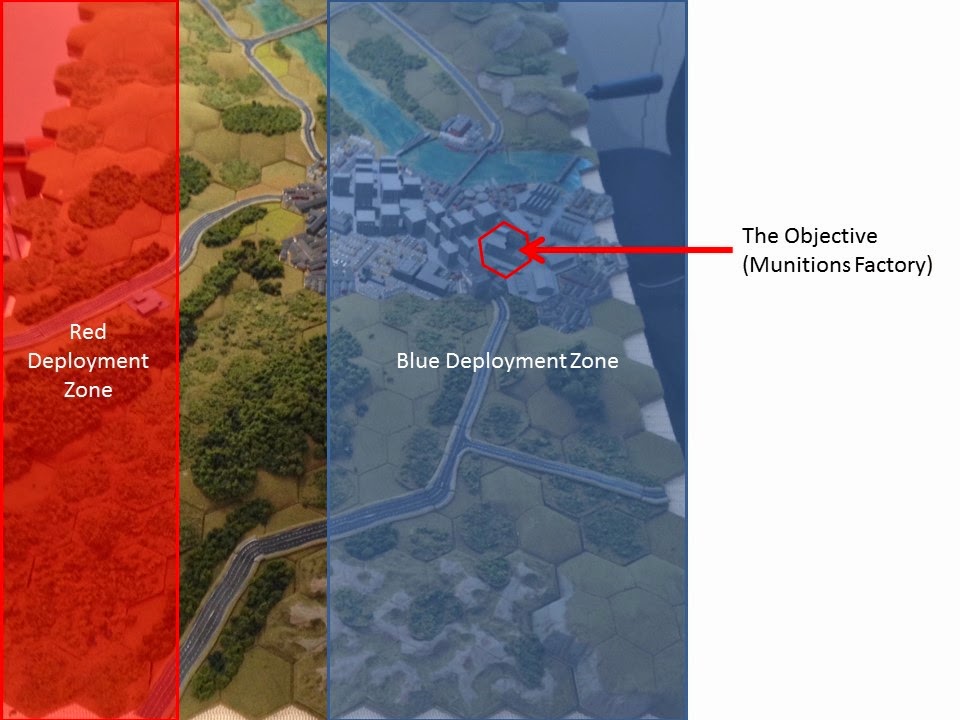 The city fighting had been brutal. I had lost most of my two infantry battalions, and my western T-90 battalion had also suffered heavily (unsupported against infantry) in the city fighting.

I couldn't see anything (bad visibility in the city), so no spotters to call my Artillery in. And my troops were moving too slow after the rapidly retreating Aussies ("there's no shame in a tactical withdrawal", says John!) to conduct a coordinated assault into the factory and hold it on turn 10.

My only chance was to assault with my intact T-90 battalion into the city, unsupported by infantry (again!). I had seen what had happened when I did that and didn't fancy it. So I conceded that I couldn't take my objective and withdrew, handing the Aussies a narrow 1-0 scenario win.

If I had been more alert, I should have counted how many casualties I had inflicted. After the game, I realised I only needed to destroy one more platoon to force a quality check (on 5+, for two-thirds of the formation destroyed) to see if they quit the field. I should have sent in my T-90 battalion, which would have suffered but had a good chance of causing at least one casualty.

All up, it was very close, and a great game!!

What did I learn?:

1. Helicopters are useless on a battlefield dominated by complex terrain (mine did absolutely nothing, except for one getting shot down by an RBS-70...).

2. In a deliberate assault, have the engineers on hand to breach unexpected minefields!

3. Masses of Artillery doing a rolling prep fire barrage works quite nicely in a deliberate attack.

4. ICM is brutal when you bunch your forces up too much.

Lots more, but too much to cover!!