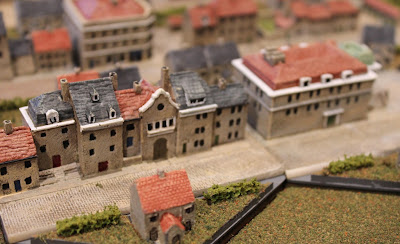 I have been working recently on updating my 3mm buildings and town sections. The Monopoly buildings seen in all of my battle reports up until the last one have served me very well over the years. But in the past year or so, a couple of companies have released 3mm buildings that in my opinion are an improvement on the Monopoly buildings. I had been buying stuff as I became aware of it, so I decided to actually get it all assembled, painted and onto the table.

The other reason for updating my buildings is that I wanted to set them up so that my miniatures bases could fit into the towns, and not have to be balanced on top of the buildings. To do this, I devised a sabot system that fits in with both my Hexon terrain and my miniatures' bases. The idea of removable building sections on a larger urban base is not a new idea, but it was new for me to create sections to integrate with my hex terrain.

Again, my friend with the laser-cutting machine came to the rescue, in the form of Dean at Olympian Games here in Canberra. Dean cut me some triangular sections that I could glue onto the corners of a standard Hexon 100mm hex 'template' (or a 100mm laser cut MDF hex). This was sized to leave a 100x65mm recessed section, into which I could fit either a 100x60mm or two 50x60mm bases with buildings on them. Alternately, the building base(s) could be removed and several of my vehicle bases with Infantry sabots would fit within the same area. The corner sections that remain on the building hex section have buildings on them, which would remain when the other sections were removed, so that the troop stands would still be in amongst buildings.

Some pictures illustrating how this works are below. The first photo shows the construction of a Town-Hex section, and how the troops fit into the lift out sabot section. The Hex corners have a triangular section with permanently attached buildings. The middle part is space for either troops (if occupied) or buildings (if not occupied):

Some samples of buildings from various manufacturers follows:
﻿
The first photo below shows a selection of European style buildings. The larger buildings are from the excellent Total Battle Miniatures Skirmish 1/1: 3mm Western Europe range of resin buildings:

These come cast on to larger 100x100mm square tiles - to make them fit to my hex system, I cut the tiles up to sizes that would fit my new sabot system.

The smaller individual houses are also resin, from the Simply 6 range, supplied by PicoArmor:

The photos below show a large number of laser-cut cardstock buildings from Gamecraft Miniatures:

Shown are various Town-Houses / Row-Houses and on right of picture are some industrial type buildings. Painting the facades and roofs of the terraces in different colours individualises the buildings a little, and varies them a bit.

﻿﻿ Gamecraft also does these very nice high-rise apartment or office buildings. These make a good CBD for larger towns.
﻿﻿


﻿
Below is yet another type of building, this time 3D printed. It is my Service Station (Gas Station for our American friends...) from Kokoda Trail Models store on Shapeways:

Various Shapeways stores have some nice 1:600 (3mm) buildings. The only problem is they tend to be relatively expensive, but for unique pieces they can work well.