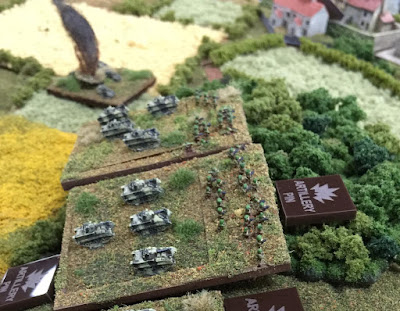 Our merry crew put on a demonstration game this weekend at the inaugural Little Wars Canberra war-games convention. The Canberra event expands upon the successful Little Wars events already run over the past few years here in Australia, in Melbourne and Adelaide.

In its first Canberra showing, the event had some fantastic quality (and widely varied) games. Whilst I did look at all the other games, unfortunately I was too focused on our game during the day to take photos of the other games (I know others did though, so I'm sure they'll appear online soon enough...).

The game we ran was set at the height of the Cold War in 1988. The premise of the scenario was that a Soviet crossing of the Inner German Border, followed by rapid advance into West Germany. Facing them in this sector are elements of the British Army of the Rhine (BAOR).

A Soviet Motor Rifle Division has established a crossing point of a fairly significant river. They have managed to capture an intact bridge across the river at a large town. The divisional engineer battalion has subsequently constructed a PMP pontoon bridge downriver from this, to provide the division with two crossing points. The division's lead Motor Rifle Regiment is defending this bridgehead, to allow the remainder of the division to cross and exploit the crossing, consolidating the bridgehead.

The lead Regiment is largely intact, with its three battalions (in BTR-70s) supported by the Regiment's tank battalion (T-62s), with a company attached to each battalion. The Regiment has its standard regimental assets, including AT, SAM, Engineer, and Recon companies, plus the Regimental Artillery Group (RAG), comprising a battalion of 2S1 122mm SP Guns.

To assist in their important task, the Soviet Division commander has inserted a Forward Detachment, consisting of a Battalion of Airborne Infantry, to secure the key approach routes to the bridgehead. Additionally, a company each from the Division's SAM and AT Battalions, as well as the Divisional Tank Battalion (of five companies of T-64BV) have been placed at the disposal of the Regiment Commander. Additional fire support is provided by a Battalion of 2S3 152mm SP guns and a company of BM-21 Grad 122mm MRLs attached from the Divisional artillery to the RAG. All Soviet troops are "fair" quality, except the Airborne Infantry Battalion who are "average" quality.

Recognising the importance of this bridgehead, the BAOR Corps commander has ordered a counter attack to destroy the bridgehead. Since the NATO forces are severely pressed in all sectors, forces available for this mission are limited. However, the Division Commander in this sector has released an Armoured Regiment (battalion) of Challenger 1s and an Armoured Infantry Battalion in Warrior IFVs for the mission. Supporting the counter-attack is an artillery regiment (battalion) of Abbot SP 105mm guns, and two flights (airstrikes) of Tornado ground attack aircraft. All of the British forces are of "good" quality.

The BAOR forces for the game were commanded by Ray. Their mission was to 'neutralise' the bridgehead. They could do this by either destroying the bridges, or being in a position to apply direct fire to the bridges, at the end of the game (1 VP for each bridge), or by crossing over the river (1 VP per unit/company).

The Soviets were commanded by John. Their mission was to protect the bridges (1VP for each intact bridge free from direct fire at the end of the game). Also 1 VP for each BAOR unit (company) destroyed. In points terms, the BAOR force was roughly double that of the Soviets.

I was to be the umpire and chief spruiker to the public for the game.

﻿﻿
By the end of the game (8 turns), the British had failed to get to the bridges (0 VPs). The Soviets had destroyed one British Company (1 VP), and had both bridges intact (2 VPs). So the game was a 3-0 VP win to the Soviets. More importantly though it was a good fun game, and we got a lot of favourable comments and discussion with members of the gaming public.

Post-game discussion agreed that the British plan to focus on the one flank had been good, however the attack should have been more aggressively executed. With only eight turns, the Brits had started too started slowly (spending two turns moving recce troops forward before the main elements came on and started moving). Instead, the recce could have been dispensed with and the BAOR force, with better quality and equipped troops, could have been pushed rapidly down the extreme E flank in locally superior numbers. Hindsight is a beautiful thing!

Thanks to Ray and John for assisting in putting on a most enjoyable game. To add to the fun of the day, the game picked up a prize for 'best terrain' and I scored a boxed set of Gripping Beast Crusades Arab Infantry - very nice!!﻿﻿