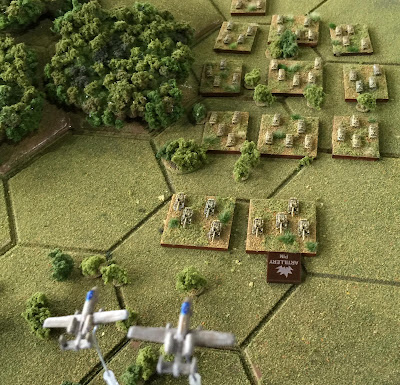 Last weekend was that time of year here in Australia when our largest gaming convention, CANCON, is run. I always look forward to seeing all the demonstration and competition games and spending plenty of money with the traders.

For my contribution, I wanted to put on a 3mm participation/demonstration game this year. So that's what we did - with the help of gaming mates John and Tony, we put on two days worth of 3mm Fistful of TOWs goodness. Unfortunately my good mate Ray that I usually run these things with had to pull out of attending this year just before the event.

Some photos of the packed gaming halls are below:

For the participation game itself the scenarios had to be relatively straight forward, of a manageable size whilst teaching newcomers, and also leave plenty of capacity to talk to members of the public and answer their questions.

With the recent hype of the Team Yankee game recently released by Battlefront, I thought we could ride its wave of popularity and utilize the setting for our scenarios. Having re-read the novel just recently during the Christmas holidays, I chose two of the actions that were at a level suitable for the FFT rules:
These were used as the basis for the scenarios, however some artistic license was used to try and balance the scenarios in terms of the FFT system. More detail on each scenario is included in the description of the two days gaming, below.

The scenario duration is 10 turns.

The 3/78 Mech battalion may deploy anywhere in the western half of the table.
They must stop a Soviet breakthrough, earning 1 VP per turn, after the 6th turn, without any Soviet units exiting the W table edge.

The Soviet 279 Motor Rifle Regiment enters from the E table edge, and gains 1 VP per unit exited from the W table edge.


Unfortunately for the Soviets, casualties continued to escalate. Faced with the US 3/78 Mech Battalion fully intact and in strong defensive positions, the Soviet MR Regiment withdrew to lick its wounds.

This was a very tough battle for the Soviets. Due to the time limit, they had to attack quickly and try to break through, which meant they could do little manoeuvre and had to attack the strong US position frontally. Perhaps it could be done better if played again - maybe with a deep, echeloned, attack against only one flank, instead of an attack on a broad front? One thing that the Soviets would definitely do is ensure their Air Defence assets travel well forward, to assist in the protection of the the lead elements.

Funnily enough, the outcome reflected what occurred in the Team Yankee novel, with the Soviets being smashed by the US Battle-group. The only difference was that the initial Soviet artillery barrage failed to inflict any casualties (due to the US reverse-slope deployment), whereas in the novel one of the US Infantry Companies was virtually wiped out by a heavy initial barrage.

The scenario duration is 8 turns.

The 3/78 Mech battalion enters from the S table edge. They must capture and hold the town of Korberg by the end of turn 8.

Korberg is occupied by a Soviet MR Company (3x BMP-1 MR Platoons) at the start of the game. The Soviet Tank Regiment (-) enters from the E and/or W table edge, and must stop the US troops from occupying Korberg.

As per the ORBAT for the First Day scenario, but substitute the following 'allocated support':
Soviet Tank Regiment (-):


In a reversal of the previous day's battle, this one was an ugly battle for the US troops. Again, it was a tough scenario for the attacking side. However, in retrospect the US battalion could have advanced a little more cautiously initially, keeping tanks and/or M-901s in overwatch to prevent interference by counterattacking Soviet troops.  Also, keeping the force a little more compact and mutually supporting may have prevented some of the casualties?

In any case, the result was a heavy defeat for the US Battalion that had inflicted such a heavy defeat on the Soviet MR Regiment only the day before. The 3/78 Infantry Battalion would not be taking any further part in the coming actions of the Third World War.

Across the two scenarios, the attacking forces were destroyed almost totally. I'm sure there is something in this! To me, the scenarios reinforced some commonly accepted tactical principles; the strength of defence in the first battle, and the benefit of surprise and concentration of force in the second scenario. They have certainly provoked some thinking about how future attackers in our games might 'crack the nut' of attacking?!

From the perspective of the demo/participation game, it was successful. Plenty of people had showed interest in the scale and the period, asked a lot of questions, and given us positive feedback over the CANCON weekend. We got a few players involved as participants too. So objective achieved.