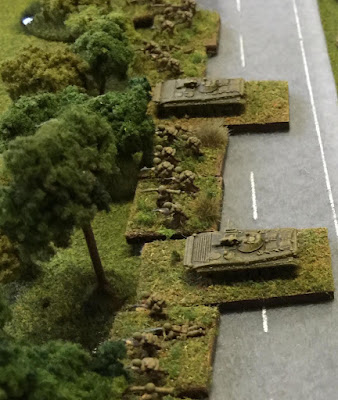 Like many people worldwide, a small group of us here in Canberra have been intrigued by Team Yankee. But we're on the side of those "splitters" that think the game is better off played using smaller scale miniatures than the 15mm minis that Battlefront is producing for the game.

We decided to play the rules "as-written" - ie. no changes to any measurements from the 15mm version, other than using the smaller miniatures on smaller bases (we use 20x40mm for tank teams and 20x20mm bases for infantry teams). The miniature to ground-scale just seems more pleasing to the eye (doing away with the 'tank car-park' that is a common criticism of Flames of War (FOW), and now TY, in 15mm.

As an added bonus, even the most expensive 6mm minis are considerably cheaper than their 15mm brethren! Even here in Australia, the superb GHQ miniatures (the most detailed but also most expensive of the 6mm miniatures on the market) can be fielded for 1/5 to 1/6 of the price of the 15mm offerings from Battlefront. Of course, this means you can field an army (or even two or three!) for much less expense.

The result? Well, we have a small (but perfectly formed!) group of half a dozen of us doing Team Yankee (TY) in 6mm. We hope to grow this number as more people learn about the advantages of 6mm for TY, and perhaps see us playing it on a regular basis. Most of us are closet micro armor gamers from way back. In fact, from talking to many gamers recently at the Cancon 2016 game convention, it seems that most war gamers have dabbled in Micro at some stage and have a small (often un-used) collection of micro armor in the bottom of their cupboard somewhere. Well, the publication of TY is now a great excuse to dig them out! Most of our group already had some miniatures, and just had to augment them with some targeted purchases. Having said that, some of us took the opportunity to start new armies.

We allowed ourselves six weeks to gather and paint our forces, and last night we had our first intro game. This was played at our local games store (Jolt Games) by three of us (me, Tony and John), with one additional (Ian) also keenly watching on. Most of us were new to the TY rules (although I used to play FOW about 10+ years ago), so it was very much a learning experience. As such, we decided on 60pts per side.

Since there were only three of us actually playing, we did a two-on-one battle. I fielded Soviets, which took on a combined NATO force of 30pts of Canadians (Tony) and 30pts of British (John). The British and Canadian troops were based on fan-made unofficial unit cards available from the 6mm Team Yankee Facebook Group.

We kept things simple for our first game and didn't take any aircraft. I took things ultra simple as Soviets and only took two units - a tank company (T-72s) and an Infantry Company (BMP-1s). I can't remember exactly what the NATO guys had, but know that the Canadians had a platoon of Leopard 1s and some M-113 mounted infantry, and the British had a platoon of Chieftans, some Milans in FV-432, some Infantry in FV-432s, and a pair of Abbot SP Artillery.

The battlefield is shown below. We used relatively dense terrain, which I think is preferable for an interesting game. The Soviets entered from the right, Canadians & British from the left. Since we played at a store, the terrain had to be relatively transportable, so we used a terrain mat (from MKP), some felt roads (Hotz) and some of my usual Hex terrain hills and fields (Kallistra). There was also a stream (top right, GF9) and a village (various manufacturers). Trees and Woods were made as per my 3mm scale woods, using MDF with clump-foliage on top, but scaled up to 6mm using larger nails for the tree-trunks.


Some pictures and description of the game action is below:

﻿
Unfortunately since this was our first game (and therefore lots of rules consultations), we had to cut the game short at turn four. Neither side had captured any objectives, but the Soviets had taken much heavier casualties. So I suppose a 'winning draw' to the NATO forces. Next time I know we'll be much quicker, as the rules are quite simple once you get playing.
The game was good fun and we're looking forward to many more. We definitely think the game looks and plays better in 6mm, so our intro confirmed this aspect for us.﻿
Posted by bish at 12:49 AM 11 comments: