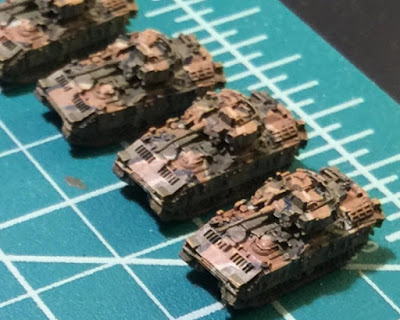 Following the theme of other recent posts, I have also picked up some 6mm GHQ US forces on eBay that I plan to use for "Team Yankee".

Some of the minis were brand new and some were used and requiring re-painting. First I picked up a new GHQ "US Mechanized Infantry Combat Command" comprising 14x M2s, some HMMWVs (3), some Trucks (3), an M577 Command vehicle, a M113A3, and a M113A1. I also picked up a lot of 11x M1s second hand (one had a gun barrel that broke off leaving me with 10, although I'll try and repair the broken one at some stage...).


These troops would be added to my existing Team Yankee forces, so I decided to paint them in the distinctive MERDC camo scheme on the '80s.

Base colour was Vallejo 'US Olive Drab' Primer. Then Vallejo 'Tan Yellow' for the Brown camo areas. Finally Vallejo 'German Grey' and Vallejo 'Deck Tan' for the black and camo stripes respectively. 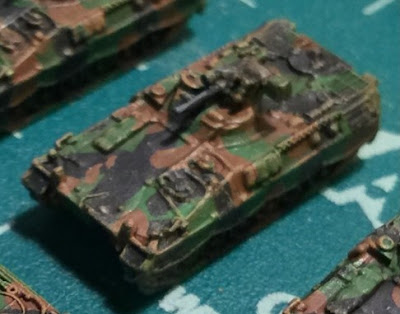 Similar to my last blog post, Over the course of a couple of eBay wins, I have ended up with a good sized modern German force.

The base of my force was a GHQ Modern German 'Combat Command' box. Like other GHQ Combat Commands, this is a great starter core force for 1:1 gaming (like "Team Yankee"). It contains enough miniatures to field a company combat-team group; 8x Marder IFVs, 4x Leopard IIs, 3x Luchs, 3x Fuchs, 3x Jaguars, 2x Iltis 4x4 vehicles, 2x PzMorser M113s, and 40-odd individual Infantry. This box was brand new, so there was no need for re-painting - I just had to paint them from scratch.

Added to this, I was lucky enough to pick up another lot of 22x Marder IFVs, and another one of 10x Leopard IIs and a single Gepard SP AA system. Between these purchases I have enough for a fairly large German force for 6mm gaming; a mixed PzGren Battalion with two Companies of Infantry in Marders, and a full Leopard II Company. Plus supporting platoons of Jaguars (3), Luchs (3), Fuchs (3). With only 2x PzMorser providing Mortar support and one Gepard providing AA support, I need to pick up some more Mortars and Gepards at some stage. Also probably some M109s and Roland SAMs, but that can wait.

Moving on to painting...

The lot of second hand Marders  I got were painted dark green with brown spots and would need re-painting. The Leopard IIs were painted in plain German 'GelbOlive' (Olive Green) - fine for early to mid 80's, but I wanted to target my force for mid to late 80s 'Team Yankee' gaming under the new "Leopard" supplement.

I therefore decided to repaint my entire force in one coherent paint scheme, using the NATO 3-colour camo scheme introduced from the mid '80s. The Battlefront website very conveniently provides a NATO 3-colour camo template to copy for all the various German vehicles (http://www.team-yankee.com/Default.aspx?tabid=909&art_id=5257).

Using the NATO 3-colour scheme has the added advantage that my Germans can continue to be used in the same colours right up until current day. And at some stage I can supplement or substitute parts of the force with some of the more modern vehicles all in the same scheme (for example the Leopard IIA4s soon to be released by GHQ, and Leopard IIA6s, Puma IFVs, and Boxer APCs and IFVs already in the GHQ range).

I base-coated all the vehicles in 'NATO Green' Vallejo primer. For the already painted vehicles I didn't even bother stripping - I just painted over the top. I then heavily dry-brushed with Vallejo 'German Cam Bright Green', to provide a suitable brighter, lighter green base coat.

As per my usual process, I then gave them all a quick drybrush of Vallejo 'Yellow Ochre' to highlight details and unify the camo colours somewhat. This was followed with an Army Painter 'Soft Tone' ink wash, providing shading and bringing out further detail. Finally, some details on MGs, Tracks, Wheels etc and the models were done.

I'm very happy with how the minis turned out. Even the re-painted vehicles don't seem to have any detail obscured by multiple layers of paint. And the force looks coherent and tied in together. I can't wait to get them onto the gaming table!