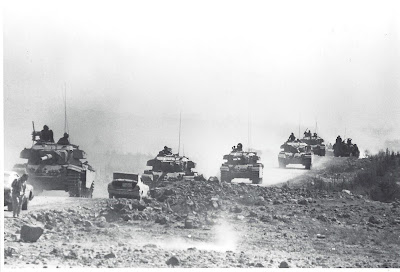 I'm quite happy to read some history books for scenario inspiration, and try to convert it into a scenario. But I don't feel the need to "re-invent the wheel" if someone else has already written some perfectly good wargame scenarios.

As part of my search I've dug out some of the books and board-games I've collected over the years. And I've discovered that there really are some good ones already out there for AIW scenarios. In particular, now that I use hex-terrain for my gaming, I've found that board games translate very easily to the table-top, provided that the board-game's units are also at the 'level' of your chosen table-top gaming rules. For me, that's rules that use platoons as the counters in the board game.

In no particular order, here's some of the scenario resources I've found:

Avalon Hill's The Arab-Israeli Wars. As the title probably suggests, this board-game is a gold mine for AIW scenarios! It has 24 scenarios, with most of them being for the '67 and '73 wars.

The scenarios are quite varied in size, ranging from quite small (several companies per side), up to really quite large (with ~ Brigade sized forces on one or both sides). They are also quite varied in the types of actions, with some 'armour-heavy', some combined-arms, and some purely infantry affairs. The scenarios work their way up from basic to advanced, to align with the board-game rules introduced. But this basically means they work up from less troops and troop types, up to those with more troops and variety.

The scenarios all look very good and I look forward to playing some soon. With 24 scenarios to play, this resource alone could keep me gaming for quite some time!

Clash of Arms Games' From Golan to Sinai. This is another great resource, but this one is actually written specifically for miniatures games. Specifically, it was written for the Clash of Armour rules, but the  blurb on the back cover makes it clear that the scenarios can easily be used with any 'tactical' rules systems. For example, I see no reason why they won't work extremely well with Fistful of TOWs and am sure they'd also work with Modern Spearhead. I know they work with another system, as I have actually already posted a battle report for the "Quneitra 1973" scenario, played at our club a few years back, using the Cold War Commander rules.

This scenario book is one of my favourite AIW resources. It has six scenarios spanning three wars (one for 1956, one for 1967, and four for 1973). All include the TOE for the forces involved, as well as maps and special rules. 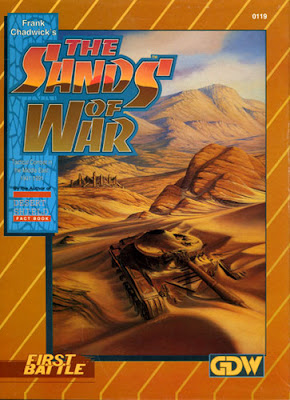 ﻿
﻿
﻿Game Designers Workshop's (GDW's) The Sands of War module for their First Battle series of board-games is another great resource. In fact, it is a complete games system that can easily be used for miniatures battles, especially with hex-terrain. It uses platoon counters (stands for miniatures) and a hex scale of 250m per hex (using a 10cm/4" hex grid as I use, this converts to 1:2500 scale on the table-top - very reasonable).
For my purposes at the moment, however, I'm just interested in the scenarios. This is where this game is quite interesting, since it aims to cover "Tactical Combat in the Middle East: 1941-1991". It does indeed have several (6) World War Two scenarios, and also has a good number of AIW scenarios for all the conflicts: 1948 Independence War (3), 1956 Sinai Crisis (2), 1967 Six Day War (3), 1973 Yom Kippur War (2), and 1982 Lebanon (3). Additionally it has some very interesting scenarios for the Iran-Iraq war (8), and the 1991 Gulf War (5).
There is also a Sands of War Expansion Kit as a separate module, which includes more scenarios: WW2 (3), 1967 (1), and 1991 Gulf War (4).
One of the interesting aspects included in the rules is a campaign system. This is very simple, but looks to be eminently playable. The rules are two pages long, covering campaign movement, setting up table-top battles, replacing losses, etc. The campaign map is also a simple double-page stylised map. This is another thing I'm keen to try out. 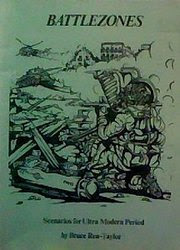 The Battlezones scenario book for the Challenger II rules system has some AIW scenarios; for the 1967 (2), 1973 (2) and 1982 (1) wars. Several of these are on the smaller side of things for platoon-to-a-base game systems (like FFT and particularly MSH). The smallest scenarios involve several companies per side, but the largest involve Brigade (on the Arab side) against Battalion (-ish, on the Israeli side) sized actions.
I look forward to reporting back on how some of the AIW scenarios from these various sources go on the table-top. They should be interesting, with different terrain, interesting forces involved and very significant conventional battles.﻿
﻿
﻿
Posted by bish at 4:53 AM