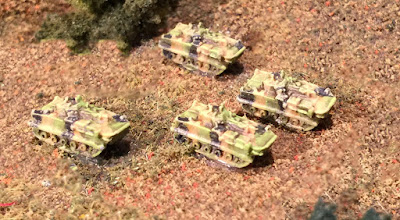 I was recently having another look at Bob McKenzie's blog; at the rules, Data, and Scenarios he has written for his Modern version of Command Decision: Test of Battle. A couple of his scenarios intrigued me, featuring Russians, Chinese and Indians, which is something different from the usual Cold War European fare popular amongst modern gamers. I decided I wanted to give some of the scenarios a try.

The first one would be Nomonhan, set in 2013 and pitting Russians vs Chinese in Mongolia! (I'm assuming when the scenario was written that 2013 was safely in the future, but now it constitutes alternate history...). I made some minor 'tweaks' to convert the scenario ORBATs from CD:TOB to Fistful of TOWs, and also worked out some data sheets for a few of the Chinese troop types that (surprisingly) aren't covered under FFT. This mainly involved doing some research for Chinese Infantry platoons and their weapons (eg. PF-98 Recoilless MAW), plus Type-96A MBTs.

This battle would be the opportunity to debut my Chinese forces. I have been collecting these over the past 6+ months, ever since Oddzial Osmy (O8) started releasing their Modern Chinese. There are now enough different models in the O8 range that a full force can reasonably be fielded, including different options for tanks, APCs etc. On top of this, the quality of O8's sculpts is always improving and as the Chinese are some of the newest models, I think they are some of their best models yet! Other new models appearing in this battle on the Russian side were the new T-90As, and again these are superb.


John opted to play the Chinese attackers, which meant I would be the defending Russians. The starting forces were deployed as per the scenario instructions. The Russian VDV battalion and attachments were all dug-in, prepared to defend the bridgehead (featuring my newly minted entrenched infantry markers!).

Since the terrain was devoid of vegetation the defenders tried, wherever possible, to use the cover of the hills and ridgelines. I didn’t fancy exposing my troops too much to the fire of the quickly advancing Chinese tank battalions, so I deployed my infantry mainly in reverse-slope positions. They would rely on their short range LAWs and MAWs to destroy tanks forced into close combat with entrenched infantry when cresting hills. For this, I relied on the steely resolve of the Russian airborne forces, with their “Average” quality rating out-classing the “Fair” rated Chinese armoured forces. My longer range AT weapons were sited with the aim of providing long fields of fire into the flanks of where I suspected Chinese tanks might advance. The vast majority of ATGWs of both sides were otherwise pretty ineffective against the enhanced frontal aspects of modern MBTs (the exception being the dangerous Russian AT-14s), limiting them to sniping at APCs only (if allowed).

In the first few turns, the entrenched Russians waited for the inevitable, trying to hold on long enough against the Chinese tanks for their own reinforcing tank battalions to arrive. Their forward elements spotted for the indirect fire of the VDV battalion’s battery of 2S9 120mm Mortars. These were quite effective in pinning the attacking Chinese Tanks, reducing the effectiveness of their fire.


The Type 99 battalion advanced quickest in the N. Their target was the northern-most company of Russian infantry, dug-in in the Rough terrain along the river. As they approached the Chinese MBTs suppressed the entrenched Russian infantry, and destroyed a platoon of 9P149 Shturm-S (AT-6C on MTLB). In the process, they were sniped from long range by AT-14 teams from the flanks, losing several Platoons of Type-99s.


The accompanying Infantry then dismounted their ZBD-04s and assaulted the Russian infantry company’s attached AT-14 squad. This was easily destroyed and the next turn the Chinese infantry, supported by their IFVs and a Type-99 platoon assaulted into the forward-most Russian platoon. This proved a costly assault. Over several rounds of close combat, the better quality and entrenched Russian infantry destroyed all three Chinese infantry platoons and two of the three ZBD-04s with small-arms, LAW and MAW fire. The Type-99 Battalion’s accompanying infantry company was therefore wiped out, and they also suffered a couple more MBT platoon losses from long-range AT-14 fire. By turn 4, the Type-99 battalion had dropped to the level requiring a ‘unit losses quality check’, which they heroically passed and elected to fight on! ﻿

﻿
During all of this at some stage, the Chinese battalion’s attached SP Gun battery also rolled a SNAFU result after some ineffectual indirect fire, and got hit by counter-battery fire and wiped out.


﻿
﻿
Meanwhile, in the east, the Type-96A battalion had initially advanced more slowly. Due to lack of spotted targets, its attached SP Gun battery concentrated on laying covering smoke, to avoid AT-14 fire like the other battalion had suffered. On turn 3, the Type-96As advanced and with a volley of fire destroyed the dug-in ASU-85 platoon that had been positioned on the Russian’s far E flank (it didn’t even get to fire in the game!).


The Type-96A battalion then sent its attached infantry in ZBD-04s to close assault the forward-most platoon of the Russian infantry company on their right flank (E), plus its attached AT-14 squad. The Chinese Infantry company easily rolled through the Russian platoon, then re-mounted and fell in behind the battalion’s MBTs, which had continued to advance and were now systematically destroying more Russian infantry platoons with their main guns. 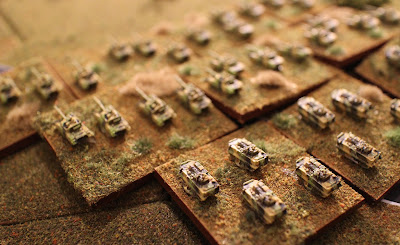 ﻿﻿﻿﻿﻿﻿Amazingly again, this battalion’s attached SP Artillery battery was also destroyed by counter battery fire! (We thought it was amazing anyway, since we hadn’t previously had counter battery destruction of ANY artillery previously, so two batteries in one game was unique…)


Turn 4 saw the reinforcing Chinese 2nd Battalion of the 184th Special Operations Brigade arrive by helicopter. Fearing the AA coverage of the SAMs positioned near the Bridge, the Chinese air-assault troops were landed on the NW edge of the table, in dead-ground, and started advancing on foot towards their objective.
The recon company of the Russian 185th Tank Regiment arrived in their BMP-2s on the road entering the battlefield from the west. These rapidly moved to take up observation positions on the high ridgeline SW of the bridge, in order to call in artillery on the advancing Chinese air-mobile battalion.


By the end of turn 4, the Chinese Type-99 battalion in the east had been halted and had largely become combat-ineffective as it couldn’t afford additional losses (with only three MBT and one IFV platoon left). The Russians had blunted the attack from this direction.
The Chinese Type-96A battalion in the south had destroyed the Russian right flank Infantry company, causing a ‘unit losses quality check’ on the Russian Infantry Battalion. The Russians failed this test, with the Infantry abandoning their positions and dispersing into the countryside.


With the destruction of the Russian infantry battalion, the Chinese attack from this direction had succeeded and they advanced to take up positions on the high ground to the NE of the bridge.


The Chinese reinforcements landed by helicopter were now making slow and steady progress from the NW. The Russians desperately needed their armoured reinforcements to arrive!
On turn 5, both the Russians and Chinese Regimental supporting artillery arrived –152mm SP Guns for the Chinese (with HE and ICM), and 122mm SP Guns for the Russians (with HE only). Both, however, failed their availability rolls in their first eligible turn.
The 3rd Tank Battalion of the 185th Regiment (T-80Us) arrived from the W, followed on turn 6 by the 1st Battalion (T-90As). The T-80U battalion moved rapidly to the SE, to engage the Type-96A battalion. The two tank battalions traded fire, with the halted and hull-down Chinese tanks (supported by a 152mm Artillery ICM mission) getting the better of the exchange and destroying several T-80U platoons.
﻿﻿﻿

The Chinese Infantry Battalion and the Russian Tank Regiment’s Recon elements both faced off across the ridgeline separating them. The ensuing fire-fight resulted in the destruction of the Russians’ BMP-2s by MAWs.

The T-90A battalion moved E, to take up a position where it could defend the bridgehead against the Chinese Infantry Battalion. Faced with the threat of tanks and artillery whilst exposed in the open, the Chinese Infantry (wisely) opted to spread out, halt in place and dig hasty entrenchments.


﻿﻿Having halted the Chinese infantry, the T-90s then moved forward to the river, to engage the remaining Type-99s of the Chinese 1st battalion. Again, the two tank battalions traded short-range fire, with the exchange resulting in several platoons each destroyed.

The game was meant to go to eleven turns, however as it was late in the evening we wrapped up at the end of turn 8. The result had already been decided in scenario terms:
The Russians had 5 VPs - 1 each for the 3 surviving SAMs, and 1 each for the 2 surviving tank units (T-90 and T-80 battalions), all within 10” of the bridge.
The Chinese had 0 VPs – none of their surviving SAMs or Battalions were within 10” of the bridge. Additionally, the Chinese were unlikely to have been able to destroy the Russians around the bridge with their remaining forces.
Whilst a 5-0 VP scenario looks quite lop-sided to the Russians, it certainly didn’t feel that way. The open terrain made this scenario feel like a real old-fashioned tank slug-fest!!
The losses were pretty steep on both sides. It’s just that the Chinese are up against it trying to destroy better quality dug-in Russian infantry before their reinforcing tanks arrived. I have a feeling that if the scenario were re-played, the Chinese would be better served taking a couple of turns swinging one or other of their tank battalions to the opposite flank and concentrating their attack from one direction. As the Russian defender, I was hesitant to re-deploy my defenders out of prepared entrenchments, so a more concentrated Chinese attack from one direction would probably carve through the defences whilst suffering fewer losses.
Lessons learned:


The majority of ATGMs are useless frontally against modern MBTs with ERA, Active Protection Systems and composite armour. They are only of any use from the flanks, or against APCs.
I had the right idea trying to hide my infantry from long range tank fire. But there were still too many opportunities for massed tanks to sit off at range and pick off exposed platoons. Open terrain requires very different tactics than close terrain, since MBTs can very easily just stand off from their objective and reduce the defenders with direct fire (even with low-quality crews).

My ATGM vehicles and teams were particularly vulnerable since I had deployed them forward to maximise their range. They may have been better off being deployed in depth to offer some protection, and look for flank shots as the enemy tanks and infantry assault through the forward infantry positions?

ASU-85s in particular are pretty useless against MBTs – their only real use is for trying to destroy infantry and IFVs/APCs.

Real-world tactics work well in FFT; defenders need dispersion, depth and mutually-supporting positions. Attackers need to approach from a concealed forming up point to reduce their vulnerability to defensive fire, attack from cover, and suppress the defenders.